GJM staff recently came together to build a playhouse for a little boy as part of a Maumee Valley Habitat for Humanity build project. Dozens of our people contributed, and the end result was pretty incredible. We hope you enjoy this fun video of the experience. 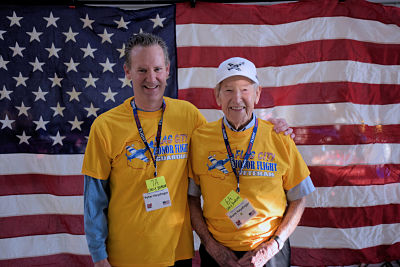 Toledoan Norm Heydinger is really good with dates. He knows where he was and what he was doing over seventy years ago. He talks about it like it was yesterday. Then again… what Norm was experiencing at that time isn’t the kind of stuff you forget. World War II was underway and Norm would soon be a long way from his hometown of Toledo, Ohio.

In January of 1944 Norm says he found himself in the middle of the South Pacific on the Navy ship Aquarius. He says he was an Ensign fresh out of the Coast Guard Academy where he studied enemy planes intensely so he would know with one glance if the enemy was approaching by air.

Norm’s job on that ship was not only to watch for enemy aircraft, but also to help bring U.S. Marines in to shore for invasions. He says he did so for about half a dozen invasions in the South Pacific. He says his first invasion was in the Marshall Islands and his last invasion was Okinawa… a date he remembers very clearly: October 1, 1945.

Only in his early twenties while in the South Pacific, Norm says he was on the main ship and they’d launch about a dozen landing craft that would hit the shore, deploying Marines. Then they would come back on board with the injured.

“The hallways of the ship would be filled with guys lying there with injuries waiting for the doctor to help them,” he says. Norm remembers with all those injured, there was only one doctor on the ship. Other shocking images are still very vivid for him after all these years.

“I remember Kamakazis flying all over, smashing into the sea, trying to hit ships… It becomes a part of you,” he says of those experiences. 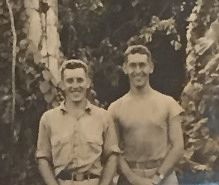 Another experience has stayed with Norm through the years, but this is a happy memory. It was an unanticipated family reunion of sorts in 1944, right in the middle of the war. Norm says his brother Edward was serving in the Air Force and it just so happened that they were both at Guadalcanal, an island in the South Pacific that had seen intense fighting earlier in the war. Norm says when he got wind that Edward was so nearby, he managed to find him and they spent the day together. A picture from that day is still on the Heydinger refrigerator. Norm says Edward settled in Findlay after the war and was with Marathon Oil for many years as an economist.

Norm says he left the Aquarius on May 8, 1945, another date very clear in his memory. It was V-E day, or Victory in Europe Day… which marks the formal acceptance by the World War II Allies of Nazi Germany’s surrender, though the war was far from over. Norm says he flew home to the US for a 30 day leave and was supposed to go back to the ship, with plans to go to Okinawa, but says instead he was transferred to shore. He called it the happiest day of his life. But, after spending the summer of 1945 in the states, he was shipped back to the Pacific on a Coast Guard cutter, the USS Gladwin. Named for a city in Pennsylvania, Norm says he’s always wanted to go there to visit.

On the Gladwin Norm says his duty was in the North Pacific in Alaska for rescue and plane guard service. From there he says he went back to the west coast to San Francisco and left the Coast Guard in April of 1946. 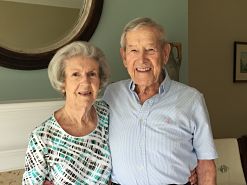 Two years later he met the love of his life and then another important date: June 24, 1950, when he and Dorothy were married. Norm says they just celebrated their 68th wedding anniversary and have four children, seven grandchildren and three great grandchildren.

While many veterans prefer to leave memories of their wartime service in the past, Norm says he enjoys reliving it. He says he feels very fortunate and while he had some horrible experiences, he also had some wonderful experiences. He says shipmates became good friends, and he even had an opportunity to spend some time in Hawaii.

“I certainly have been blessed,” he says. “All of my classmates from college, buddies from the Coast Guard, Miami University classmates – they’re all dead. I’ve been fortunate.”

74 years after Norm shipped out to the South Pacific during World War II, came another date he will surely never forget. This past June 5th he was one of 76 veterans to travel with Flag City Honor Flight to Washington D.C. Seventeen of the veterans on board, including Norm, were World War II veterans.

“We know there are many more veterans out there like Norm who have yet to see the memorials,” says Flag City Honor Flight Executive Director Deb Wickerham. “We serve veterans from Findlay, the Toledo area, across the state and beyond. We need to continue to get the word out to area families that they have access to Honor Flight. They all deserve this one last tour of duty with honor.” 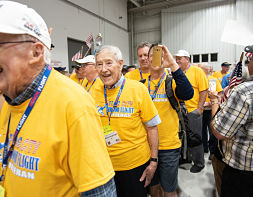 Norm’s son Peter was his guardian for the day, accompanying his father to the memorials. It was the first time Norm had ever seen the World War II memorial. He says one of the most impressive experiences on the trip was to see the Changing of the Guard at The Tomb of the Unknown Soldier at Arlington National Cemetery. Another memorable moment: the reception and homecoming celebration back at the airplane hangar in Toledo. Bad weather delayed the flight’s return a bit, but a large crowd was still waiting. Dorothy and other family members joined hundreds of others who formed a line to welcome the veterans into the hangar.

“I felt like Jesus walking into Jerusalem… I’ll never forget that. Never.”

The capper for Norm: local Boy Scouts handed him a bag full of gifts. Children had written him letters. “Truly amazing,” he says. He saved all the letters, notes and cards. 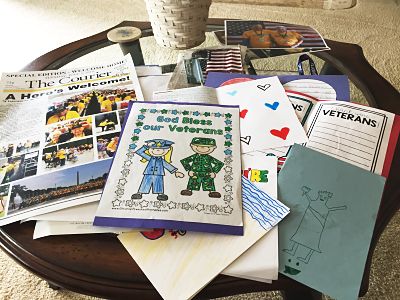 Yes, Norm Heydinger has been blessed. He was given an Honor Flight over seven decades after his military service. In fact, at 97 years old, he was the oldest veteran on the flight. He was able to walk the entire day in Washington with his own son and arrive home to a hero’s welcome, and, of course, to his Dorothy.

Flag City Honor Flight operates two flights a year. The next flight is October 2, 2018. The nonprofit organization is run completely by volunteers and is funded solely through donations. Flag City Honor Flight is always in need of sponsors to help pay the way for veterans like Norm. Learn more about how to help at flagcityhonorflight.org.

Gilmore Jasion Mahler is a proud supporter of Flag City Honor Flight, donating proceeds from a special fundraiser to help pay the way for more veterans like Norm to make the trip. The firm’s 2017 event Carnevale raised enough money to pay for an entire flight and then some. The next event, called Wanderlust will be November 1, 2019. 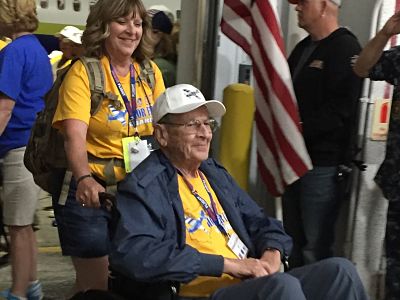 June 5th was a very long day for dozens of area veterans. It was also a day they will most likely never forget. 76 of them boarded a plane and traveled to Washington, D.C. to see the memorials built in their honor. It was the 13th mission for Flag City Honor Flight. Gilmore Jasion Mahler is a proud supporter of Flag City Honor Flight. Our firm’s special event Carnevale 2017 helped to pay for the June flight. 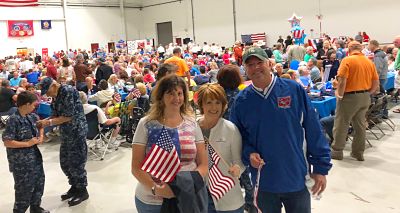 We also helped out with the welcome home celebration. Some of our team was there to cheer as the veterans arrived home. We also handed out American flags and posters to the crowd gathered for the homecoming. We hope you enjoy a couple of pictures from flight day, and encourage you to see all of the Flag City Honor Flight photos from the June 5 flight in their online portfolio. Don't forget to mark your calendar for the next flight on October 2, so you can help give our heroes the welcome home they deserve. 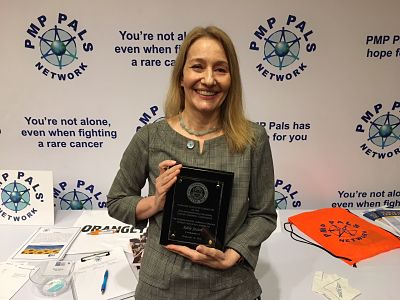 A heartfelt congratulations to Gilmore Jasion Mahler Audit Partner Adele Jasion, who was recently awarded the Gabriella Graham award for her advocacy on behalf of patients diagnosed with pseudomyxoma peritonei or PMP, a rare cancer that originates in the appendix.

A six year survivor, Adele is the treasurer for PMP Pals, a global volunteer-run organization offering hope to those fighting this rare cancer. She is also a board member for the organization and handles emails and phone calls from new patients and their families who are often reeling from a recent diagnosis. 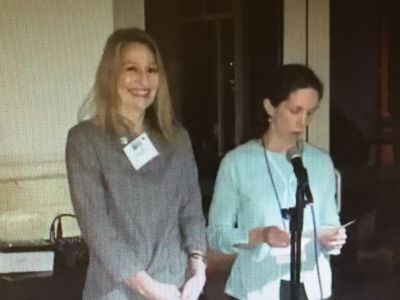 “When patients and caregivers contact PMP Pals, Adele's is the first voice they hear… She is able to share her experience, match patients with others who can guide them through this difficult journey, and most importantly, give them hope,” says PMP Pals President and survivor Chris Piekarski.

Adele received the award at last week’s 13th annual International Symposium on Regional Cancer Therapies, where surgical oncologists share knowledge on pioneering/breakthrough treatments for specific regions of the body, like the abdomen and chest.

Hundreds of physicians from around the world attended the gathering, which was presented by the Society of Surgical Oncology in Jacksonville, Florida. PMP Pals volunteers and board members were also in attendance, including Adele, who was surprised with the award which was presented by Dr. Laura Lambert of the Huntsman Cancer Institute at The University of Utah. 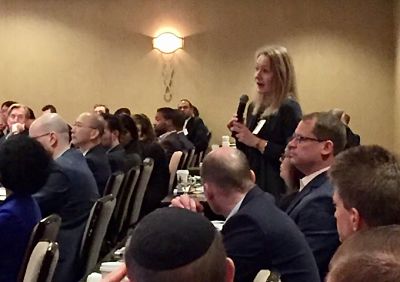 “Gabriella Graham gave me hope and inspiration in fighting such a rare cancer,” says Adele.  “I benefitted greatly from her efforts and was determined to make sure her legacy continued. It is my privilege to try to provide that same hope and inspiration to other patients. I am honored to receive this award.”

While Adele may have been surprised by the recognition, Piekarski says the rest of the PMP Pals board wasn’t surprised at all. “We're just glad her efforts have been recognized.”

We are the largest locally owned public accounting firm in Northwest Ohio.

Our blog is a helpful resource for businesses and individuals looking for news, tips and cutting edge accounting trends.